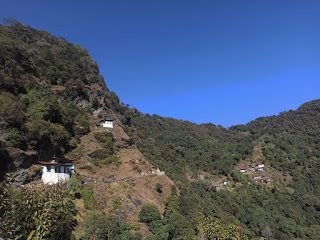 Larjab Nye/Gonpa/lhakhang at about 2642 masl is located at some 3.5 kms walk from the nearest road point; about 13 kms drive from the Mongar town along the East-West PNH. For an ardent hiker, it is an easy 2 hours hike (one way) through oak and bamboo forests. There is a single storeyed monastery built on a cliff which appears to have no end, and another small lhakhang like zangdopelri some 100 steep steps above and a cluster of hermitages some 100 meters before reaching the main temple. At this time of the year, with clear blue sky in forecast, one can enjoy the scenic beauty of beautiful village setting of Changshing gonpa, Lingkhar, Panglem and Anim gonpa towards south-east of the monastery.

Larjab Gonpa was founded by Drupthop Kuenzang Chophel from Thenmangbi village, a disciple of 9th Je Khenpo; His Holiness Gyalwa Shacha. His Eminence, Gyelthsen Tulku is the reincarnation of the Drupthob.
Oral history as narrated by the monk caretaker of the Lhakhang goes to say that; some 300 years ago, Drupthob was blessed with a cliff-like stone replica of present monastery site by his root Guru and was prophesied to construct a temple there. As prophesied by his root guru, he traversed in search of the site and reached the present monastery site, which had the exact resemblance to the replica. Upon locating the site, he entered into retreat for 6 years and said to have encountered many good omens and signs confirming his finding.
Oral history has to say that, a part of monastery was built by five dakinis, a part by lam in a day and rest by the local deity/tsen Sonam Jamtsho.
While there are many fascinating narrations about the place and the treasures discovered, I have refrained from sharing here as I deemed inappropriate to share without a proper validation.
Disclaimer: mistakes and omissions are all mine.
Posted by Pema Wangyel at Monday, November 16, 2020

You are Visitor Number.

Pema Wangyel
While i work as a civil engineer to cater to my ends need(s), i also love writing, reading, travelling, hiking and photography. I grew up in a small village under Bumthang District; central part of Bhutan. Both my parents are farmers and i grew up watching scarecrow being erected in the field.

Thank you for following my blog